Publishing from 1987 to Present 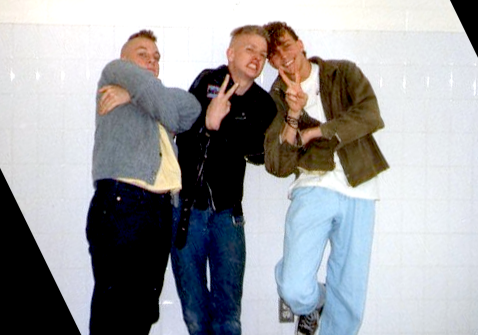 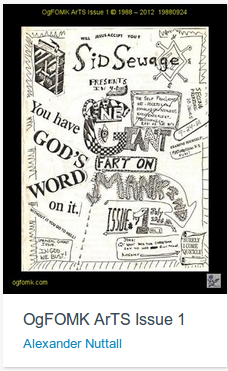 The photo above was taken by Cheryl. In the photo is from the left: Lon, Alex and Mike. It was 1987. Maximum Rock-N-Roll was the most influential publication to me. I, Alex, had a dream of being an influential punk writer, musician and artist. Oddly enough, fame was not what I wanted. I was merely a participant in a counter revolutionary uniform.

I wanted to publish. I wanted to do it myself. DIY "Do It Yourself" was our mantra. We were bombarded with products, commercials and trends. It was the same for the children of the 1920s to the end of the Twentieth Century. After a Civil War, Two World Wars, a Korean War, Vietnam, an Iran hostage fiasco, The Cold War and One Space shuttle with a civilian going kaput we knew the commercials were lies.

The news was bad. The sponsors were offering relief and solace with tobacco, beer, trendy clothes, and video games. Fantastic rock music and rap presented gritty alternatives but they too were making a buck to hide from the machine. Feed the machine, make a quick buck and escape. We thought differently.

We wanted to replace the machine with the technology that made creation available to everyone.

I was writing, talking a lot and playing in a band. After I failed 9th grade twice and was failing 10th grade with three study halls, the administrators at my public high school asked me to leave. Fortunately the Dean of Boys and his wife had their eye on me and suggested I get my GED (General Education Diploma) which was a high school equivalency course. I turned in my textbooks, filled out my exit package, got my receipts and hauled ass.

My friend, Dawn, had already used a church Xerox machine to publish her own zine. I thought that I could do that too. I ended up using the Xerox machine at the construction office of a contractor I worked for. Procurement.

By 1988 I had completed my GED. Thus graduating high school and I decided to enroll in college. I acquired an IBM Selectric Typewriter. I read more books. I was working. I was playing in my band. I was writing. I was publishing.

My work was erratic. It was of poor quality. I was struggling with the simplest things. I didn't give up.

In the ten years from 1988 To 1998 I managed to publish about 10 items. Very small items. I also worked with some others in music, writing, spoken word, publishing and performance art. I learned that I was good at getting people together but keeping momentum was difficult. The weakest link was always me.

For whatever reason people write and read. I have no idea why. Personally it's a doorway that could not be opened without help. I've learned so much from wanting to publish. Here is a web application known as PUBLISH0x and you can write and earn as both the reader and writer. Amazing.

I've tried to put this out here for your eyes. Enjoy. It's just a cave painting describing the hunt. Tip yourself for reading and me if you like.

The rest of my drivel is at Https:\\ogfomk.com

The Cat's out of the Bag

Dimka, "Grey Smoke" This is Dimka. Her name is a Russian variant word that means "grey smoke". She appeared to us about three years ago. We found her out front of our little townhouse in the rainy part of August 2016. It was cold and very wet. She was shivering and hungry.  Dimka at the front door 2016 We already had an indoor only cat. I told my wife that if this outside cat hangs around for 5 days we will adopt her. I made a little shelter outside for her to sleep in. As it turns out she had the attention of both of my next door neighbors.  a.k.a. Mosby, "Gray Ghost" George was my neighbor to the right. He did not like cats. He did however find interest in Dimka. George had bought food for her and named her after Civil War General  John S. Mosby  because of her grey coat. John S. Mosby was known as the "Gray Ghost" (Incidentally the word for guest in Russian is ghost). Joan was my neighbor to the left. She wa
Read more